My final class for my Networking degree is a “real world application” class. You get a basic RFP that outlines specs for a ficticious company’s new network, and your team has to write up a professional quote for it, pretending to be a consulting company bidding on the project.

For our project, we’re bidding on the network of a company called “Outdoor Equipment Supplies (OES)”. Our team decided on the name “Port 22 Consulting”, and we’ve got a max budget of $150,000 to spend on all the hardware, software, and networking equipment for this company.

Being a fan of networking, I decided to do the Network portion1. Essentially, it comes down to a main headquarters and a few branch offices consisting of about 35 people. The main office will have users and all the servers, which everyone has to be able to access. 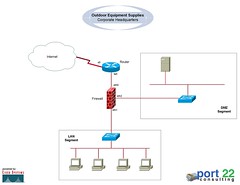 Obviously the DMZ segment isn’t complete yet, mainly since we’re still fluctuating on the number of servers we’ll need. I also haven’t decided exactly what I’m going to recommend as the internet connection for each office. I was thinking a T1 may be beefy enough for the main office, and whatever DSL or cable connection they can get cheaply for each branch office2. Any input on that either?

Assuming I have time (and the motiviation later-on), I also plan on doing per-switch port lists, indicating which rooms a given port maps to. It seems so sad to do more network diagraming for a ficticious class project than I’ve actually done for our corporate network at work, but such is life…